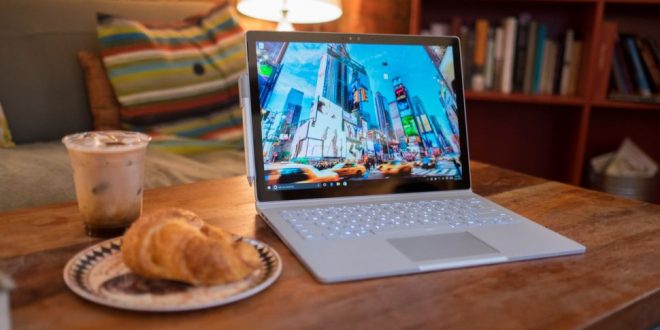 In October 2015, the Surface Book premiered as a hybrid device, one Microsoft called the “ultimate laptop.” Shipping with a detachable screen, stylus support, a dual-core Intel Skylake processor of your choosing and Windows 10 Pro, we had a hunch the company was right.

Despite an appetizing list of hardware specs, the 2-in-1 arrived with a few hiccups. There were some complaints surrounding the “Dynamic Fulcrum Hinge,” including a gap that’s formed when the laptop is closed.

The “Clipboard” tablet portion of the device has a low battery life, though that’s been largely mitigated with the introduction of the Performance Base-enhanced i7 variant; but, on the high end, the pricing is rather steep, too.

So, you can tell that we’re not the only ones already clamoring for improvements to an already promising formula. Enter the highly anticipated Surface Book 2, a would-be hybrid notebook Microsoft is so eager to announce that the original Surface Book is cheaper than ever.

Although the original launched well over a year ago, there’s been no official confirmation of a Surface Book 2. Instead, the Surface Book i7 debuted back in October, complete with a graphics-enhancing Performance Base and a handful of subtle design changes.

With reports last year that this new Windows software would overlap with Microsoft’s introduction of new hardware, we originally surmised that the Surface Book 2 would touch down alongside the Windows 10 Creators Update, slated for April 11.

Reports from DigiTimes lead us to believe that Microsoft may be revealing a more traditional clamshell laptop at its spring showing, resulting in a drastic reduction in price.

At any rate, expect the Surface Book 2 to be at least a little more expensive than Surface Pro devices to start.