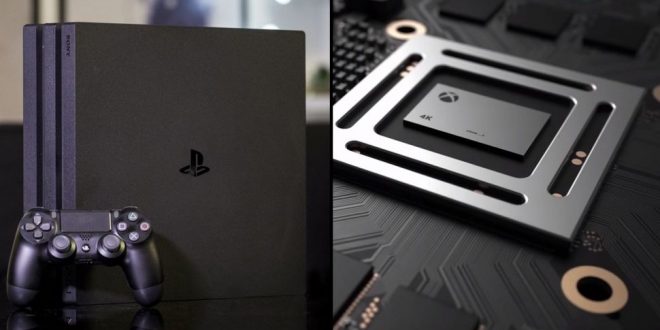 PS4 Pro vs Project Scorpio: how are the mid-generation consoles shaping up?

PS4 Pro vs Project Scorpio: how are the mid-generation consoles shaping up?

Update: It’s been revealed that Project Scorpio is going to be the very first console support an adaptive screen-tearing technology known as FreeSync, which is commonly used in PCs.  This should see the console cope with instances of screen-tearing much more efficiently than the PS4 Pro, particularly in games which have demanding 4K visuals.

It will, however, only make the console more effective in this department right away for those that have displays which also support the technology. According to Eurogamer, adaptive sync will only be available on TVs equipped with HDMI 2.1 (a display standard that hasn’t yet been ratified) or computer monitors that support FreeSync over HDMI.

It’s unlikely that a majority of people will have access to these kinds of displays just yet. However, we can expect the majority of TVs in the future to adopt the HDMI 2.1 standard so sometime in the future you’re probably going to end up with a TV that will support FreeSync.

At the moment, Sony’s PS4 Pro is comfortably the most powerful games console on the market. However, it has competition fast approaching in the form of Microsoft’s upcoming Project Scorpio console which is scheduled for an E3 2017 reveal and a Holiday 2017 release.

We know what you’re thinking – you only know Project Scorpio’s specs right now, why not wait to see how that translates into in-the-moment performance and compare the two consoles then?

That makes sense, and it’s absolutely something we will do. However, for anyone wondering whether or not they should just buy a PlayStation 4 Pro now or hold out for Project Scorpio, it’s worth taking a look at the details we have now to help you make a decision between these 4K flagships.

The headline feature of both of these consoles is that they’ll both be capable of outputting 4K content either natively or through a process known as upscaling.

Though upscaling is inferior to native 4K content, the PS4 Pro has a couple of tricks up its sleeve.

Each game handles its upscaling slightly differently, but a general theme so far on the PS4 Pro has been that games will render at a resolution that’s between Full HD and 4K and then use a more advanced upscaling method called ‘checkerboard rendering’ to fill its 4K pixels.

When talking about checkerboard rendering things can get complicated very quickly, but the important takeaway from this is that the images the PS4 Pro is capable of displaying look very close in quality to native 4K content by using this method.

Since the console isn’t out yet, we don’t know the exact specifics of Project Scorpio’s 4K output, but we can make a few educated guesses.

For Microsoft’s part, Project Scorpio will be capable of outputting native 4K content at a solid 60 frames per second thanks to the console’s massive 6 teraflops of graphics processing power and its 12GB of GDDR5 RAM.

This is compared to 4.12 teraflops for the PS4 Pro and its much lower 8GB GDDR5 RAM. Essentially, the PS4 Pro just doesn’t have the same graphical processing power as Project Scorpio and nor does it have the same RAM to set aside purely to run its games.

Something that stands in Project Scorpio’s favor when it comes to running 4K games is that the console will support an adaptive screen-tearing technology known as FreeSync, which is commonly used in PCs.  This should see the console cope with instances of screen-tearing much more efficiently than the PS4 Pro, particularly in games which have demanding 4K visuals.

It will, however, only make the console more effective in this department right away for those that have displays which also support the technology. According to Eurogamer, adaptive sync will only be available on TVs equipped with HDMI 2.1 (a display standard that hasn’t yet been ratified) or computer monitors that support FreeSync over HDMI.

It’s unlikely that a majority of people will have access to these kinds of displays just yet. However, we can expect the majority of TVs in the future to adopt the HDMI 2.1 standard so sometime in the future you’re probably going to end up with a TV that will support FreeSync.

Microsoft has said that in the future all of its first-party titles will run at native 4K. Microsoft Studios general manager Shannon Loftis stated “Any games we’re making that we’re launching in the Scorpio time frame, we’re making sure they can natively render at 4K.”

Microsoft’s last console, the Xbox One S, relied entirely on a very basic form of upscaling that generated a 4K signal without doing much to clean up the image in the process. However, a recently discovered whitepaper has suggested that Project Scorpio would also make use of upscaling, albeit through a more advanced PS4 Pro-style checkerboarding method.

So while Project Scorpio has the edge in terms of raw graphical horsepower, we don’t yet know conclusively whether it will be completely free from upscaling.

After the recently revealed hardware specs for Project Scorpio, Eurogamer has also said the the console will run all Xbox One games better regardless of whether or not they’ve received a 4K patch which will hold a massive appeal for gamers.

Even though both consoles will be great for owners of the latest 4K TVs, they’re both promising benefits to those with less powerful Full HD screens thanks.

With Project Scorpio it’s been revealed that even with a standard Full HD TV you’ll be able to choose between performance modes that make the game run better, or resolution modes that will supersample the 4K image down to your display which guarantees excellent image quality no matter what kind of display you have.

This is something that was made possible on PS4 Pro via the PlayStation 4.5 firmware update recently, which introduced a Boost Mode to PS4 Pro consoles. With this mode activated, even games that hadn’t been patched to upscale will benefit from the increased power of the console with more stable framerates.

Despite the fact that both consoles are able to improve the performance of games even if they haven’t received a patch, the sheer higher levels of power that Project Scorpio has will make it better at doing this.

Xbox’s Phil Spencer said that Project Scorpio would also improve game performance but to make the most of both consoles you’re most likely going to want a 4K display.

When you directly compare the GPUs of both consoles, Project Scoprio absolutely wins out.

At 320 GB/s the memory bandwidth of Scorpio is on par with mid-range PC GPUs and it’d give the console an edge when it comes to running 4K and virtual reality. The higher TFLOP measurement and higher memory of Project Scorpio also means that it’ll be more capable of running sharper and higher resolution images with smoother framerates and it’ll even have lower load times.

However, though the numbers look good it’s hard to make any definite judgement without being able to see Project Scorpio in action since it will depend on how efficiently developers make use of that horsepower. Software is the next big test.

4K graphics and impressive hardware are only going to be useful if you want to play the console’s games in the first place. Fortunately, both PlayStation and Xbox have a number of excellent exclusives and there’s a good deal of overlap too.

Both Sony and Microsoft have promised that though Scorpio and the Pro will be more powerful than the Xbox One S and standard PS4, they won’t have exclusive titles so you don’t have to worry about being left behind by this new half-generation. Instead, they’ll share all release titles with some being capable of taking advantage of the greater power of the new consoles.

A point in Xbox’s favor is that its backwards compatibility is currently in a far better state than the PS4’s. Although you can’t play every Xbox 360 game that was ever released during the console’s 10-year lifespan, there’s an ever-increasing list of 360 games that will work on the newer consoles and Xbox’s engineering lead Mike Ybarra confirmed that Xbox 360 and Xbox One titles will work on Project Scorpio.

Xbox has also said that with the Scorpio it also wants to “wipe out” the console upgrade cycle and allow games to work seamlessly across Xbox One, Windows 10 and the new Scorpio.

This process has already started with the Xbox Play Anywhere scheme making it possible for gamers to buy select games across the Xbox One and PC when they’re purchased digitally through the Microsoft store.

As its part of the same platform, this scheme will also be open to Scorpio.

The PS4 has a number of excellent exclusives of its own, though nowhere near the same backwards compatibility or cross platform capabilities. Its exclusives range from Uncharted 4, to Horizon: Zero Dawn, to excellent remakes of The Last of Us and the original Ratchet and Clank.

However, debating over specific releases aside, the vast majority of this generation’s biggest games have come to both Xbox and PlayStation. Titanfall 2, Battlefield 1, Overwatch and Hitman have all appeared on both the PS4 and Xbox One this year, and going forward most third-party publishers are expected to support each of the more powerful console iterations more or less equally (the occasional timed-exclusive or exclusive DLC notwithstanding).

Both systems will also support virtual reality experiences. While the PS4 Pro has the dedicated PlayStation VR headset, Microsoft doesn’t have any exclusive hardware. Instead, Microsoft will use an existing VR headset like the Oculus Rift or HTC Vive, though no specific headsets have been named as partners.

Microsoft has also said that Scorpio and Xbox One will support all Windows Mixed Reality headsets, which include models from Lenovo, Dell, Acer and HP in 2018.