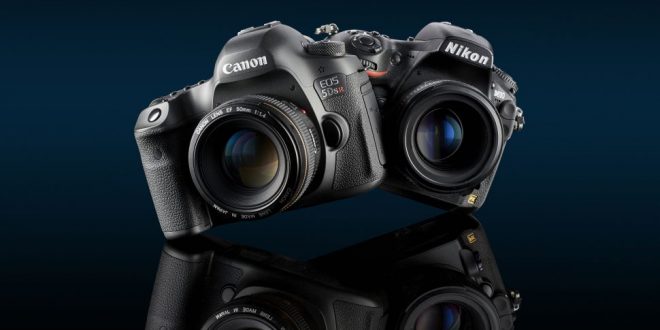 A full-frame sensor on the other hand has larger dimensions of 36 x 24mm – the same size as a frame of 35mm film, hence the name ‘full-frame’, and offering a surface area 2.5x larger than an APS-C sized sensor.

This allows for larger photosites (pixels to you and I) on the sensor, delivering better light gathering capabilities, which in turn means better image quality – especially at higher sensitivities.

Full-frame DSLRs used to be the preserve of professional photographers, but as the costs have dropped and lower-cost models have started to appear, many serious amateurs and enthusiasts can now enjoy the benefits of full-frame photography.

We should also mention full-frame mirrorless cameras. These aren’t DSLRs strictly, but the Sony A7 series cameras like the brilliant Alpha A7R II and now the Leica SL are muscling in on the full-frame DSLR market, and are particularly interesting for those who also need to shoot video.

To find out more, read this: Mirrorless vs DSLR cameras: 10 key differences. Or to get an idea of what kind of DSLR you can get at different price points, try this: Best DSLR.

In the meantime, here are the best full-frame DSLRs you can buy right now:

One of the most complete DSLRs we’ve seen

Canon’s EOS 5D series of cameras has a rich heritage – the original EOS 5D bought full-frame photography to the masses, while the Mark II unleashed Full HD video capture for the first time on a DSLR, starting a whole new genre of DSLR movie-making. That’s not forgetting the Mark III, which while not as groundbreaking perhaps as the two models before it, became a firm favourite amongst photographers. The 5D Mark IV pretty much tweaks and improves on everything the Mark III offered. This includes a brilliant new 30.4MP sensor that delivers pin-sharp results, an advanced 61-point AF system that’s incredibly sophisticated, a pro-spec performance, 4K video and some very polished handling. Put this all together, along with a host of other features and it all combines to make the EOS 5D Mark IV one of the best DSLRs we’ve seen.

It may have recently been ousted from the top spot, but this is still a terrific choice

It might be getting on a bit now (it was launched back in the summer of 2014), but the Nikon D810 is still one of the best DSLRs around, and still gives the EOS 5D Mark IV a good run for its money to boot. Images from Nikon’s 36.3 megapixel monster are bursting with detail, while its 1200-shot battery life puts the 50.6MP EOS 5DS in the shade. We’re also fans of the D810’s clarity micro-contrast adjustment with its video-friendly Flat mode for maximum dynamic range. The 51-point AF system copes well with tricky focussing situations, mainly because both the AF and metering systems are taken from the now ex-range-topping Nikon D4S. Excellent handling and relatively modest dimensions further ensure that the D810 doesn’t disappoint.

Proof that more can mean better: the 5DS sets a new standard for DSLR photography

With 50.6 million effective pixels, the Canon EOS 5DS is by far the highest resolution full-frame DSLR on the market today. The same goes for the 5DS R, which is identical to the 5DS, but features an anti-aliasing cancelation filter over the sensor to help resolve a little more detail should you need it. Pixel-packed sensors can be compromised, but not here. Image quality is superb, with as you’d expect fantastic detail, well controlled noise and good dynamic range, making it the ideal choice for the landscape or studio photographer. The EOS 5DS is now the benchmark for full-frame image quality, but it’s not quite perfect. There’s no Wi-Fi or 4K video recording, and huge image file sizes necessitate decent memory cards and a fast computer.

A full frame DSLR packed with features for a reasonable price? Yes please

Can’t quite stretch to one of our top three options? Then the Nikon D750 should be at the top of your list. The D750 still packs a cracking 24.3MP sensor and is as weatherproof as the D810, yet it’s roughly 25% cheaper. Compared to its baby brother, the D610, the D750 has a superior 51-point AF system, as well as more advanced metering and video capabilities. That’s not forgetting the wider sensitivity range, useful tilting screen and Wi-Fi connectivity. Its continuous shooting speed of 6.5fps isn’t quite as fast as some may have hoped for, but on the whole the Nikon D750 is a well-rounded, well-priced choice for enthusiast photographers.

The D5 is Nikon’s latest flagship DSLR, and it certainly doesn’t disappoint. 20.8 megapixels might seem a bit stingy, but it means the D5 can shoot at 12fps continuous shooting, while the extended ISO range of ISO 3,280,000 has never been seen before in a camera. That’s even before we get to the autofocus system – with a coverage of 173 AF points (99 of which are cross-type), the sophistication and speed of the AF is staggering. The ability to shoot 4K video is restricted to three minutes however, but that aside the D5 is a phenomenal camera that’s used by professionals the world over.

Choosing between the EOS-1D X Mark II and Nikon D5 will most likely depend on which manufacturer you’re already tied to with your lens system, but the two cameras are otherwise pretty closely matched. With the EOS-1D X Mark II, Canon has created a very powerful and versatile camera that’s a great choice for professional sport and news photographers thanks to a blistering 14fps burst shooting. It doesn’t have the outrageous sensitivity range of the Nikon D5, but it’s very capable in low light, delivering excellent images within its standard sensitivity range.

Sony has made some significant changes from the original A99 for this latest iteration, and the result is a camera that should satisfy a broad range of users. The high-resolution 42.2MP sensor at the camera’s heart is the A99 II’s greatest asset, while 4K video quality is also very good. At the same time the camera maintains much of what we loved about the A99, with excellent handing and the benefits of the SLT system presenting very real advantages over more traditional DSLRs. The arrival of the mirrorless Alpha A9 though takes the shine off a little.

It may be a generation old, but the Mark III is still a great DSLR

It may have been replaced by the Mark IV, but the Mark III is still a great choice for those after a feature-packed full-frame DSLR. If you don’t need the extra pixels, then the 22.3MP sensor won’t disappoint, delivering excellent results through the ISO range. Just make sure you shoot raw to get the best results. The AF performance is very good too, with the 61-point AF system at home shooting a range of subjects. This is backed-up with a decent all-round performance and polished handling, while it’s also incredibly well made, with a durable metal finish. The arrival of the new EOS 6D Mark II, with its higher pixel count and vari-angle screen might mean though that this becomes a little less of a tempting proposition once the new camera becomes available.

The K-1 from Pentax offers a rugged build and a full-frame sensor at a relatively affordable price. It’s not cheap, but it compares favourably with the likes of the Nikon D810, Canon 5D Mark III and Sony Alpha 7R II. Pentax’s Pixel Shift Technology is clever, and it’s great that the company has managed to produce a mode that can be used when the camera is hand-held, although the impact is subtle. Less of an all-rounder than the 5D Mark III, the K-1 makes an excellent camera for landscape, still life and portrait photography, or any genre that doesn’t require fast autofocus and which benefits from a high pixel count for detail resolution.

Looking to step up to a full-frame DSLR? Nikon has the camera for you

The D750 is good value, but the D610 gets you into the world of full-frame photography for even less. Much less in fact than some of Nikon’s APS-C DSLRS. It’s only an incremental upgrade over the preceding D600, but it addresses that camera’s issues and boasts top-notch image and build quality. Although its pixel count is the same as the cheaper APS-C D7200, the increased sensor size results in greater dynamic range and less image noise. Full-frame is the name of the game, so extra features like Wi-Fi or a tilting screen are absent, but the 39-point AF system is reliable and the 6fps continuous shooting speed respectable. The D610 is slightly overshadowed by the newer D750, but it’s still an decent camera. It’s getting on a little bit though and due for upgrade.

السابق Top 8 best business mobiles in the UK for 2017: top smartphones for work
التالي The best laptops of 2017: top laptops for every need